Lipari Foods is a food distribution and solutions provider, delivering to 14 US states and calling on more than 8,000 customers for almost 50 years. Lipari hosts an annual event every April, that is considered one of the largest selling events in the United States for the grocery industry. Their trade shows typically have 750 booths with 5,500 customers in attendance.

The biggest challenge for the Lipari food show was data collection. Months after a show ended, Lipari found themselves still getting all of the data together and trying to find where all of the numbers were. With 15,500 items with deals on them and millions of dollars in orders in a few hours, Lipari needed a platform that could handle efficient ordering and data collection. This is a fast-paced environment where every second counts and every data point is crucial. Don Symmonds, the Director of Events and Trade Relations, found that with over 5,000 customers in attendance, "we need something that's going to grab that information quickly and make it easy and understandable for the vendors."

With the Perenso Trade Show platform, Lipari found a quick, simple, and efficient solution to their data collection problem. They found it to be efficient and it reduced admin time from months to days. With thousands of orders coming in during shows, Perenso's system was able to get all that information fast and keep the show flowing.  It appeased not only the food distributor but also the vendors who attended the show. 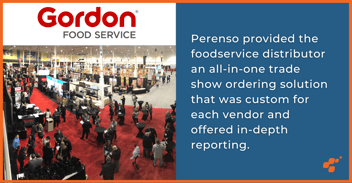 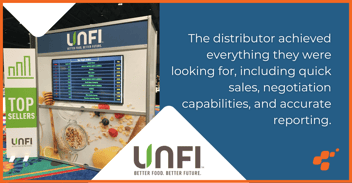